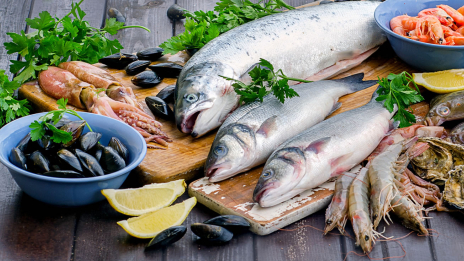 Fish and other seafood tend to be very healthy and nutritious.

They’re especially rich in omega-3 fatty acids and iodine, two nutrients in which most people are deficient.

Studies show that people who eat the highest amounts of seafood — especially fish, tend to live longer and have a lower risk of many illnesses, including heart disease, dementia, and depression.

Salmon is a type of oily fish that’s incredibly popular due to its excellent taste and high amount of nutrients, including protein and omega-3 fatty acids. It also contains some vitamin D.

Sardines are small, oily fish that are among the most nutritious foods you can eat. They boast sizable amounts of most nutrients that your body needs.

Shellfish ranks similarly to organ meats when it comes to nutrient density. Edible shellfish include clams, mollusks, and oysters.

Shrimp is a type of crustacean related to crabs and lobsters. It tends to be low in fat and calories but high in protein. It’s also loaded with various other nutrients, including selenium and vitamin B12.

Trout is another type of delicious freshwater fish, similar to salmon.

Tuna is very popular in Western countries and tends to be low in fat and calories while high in protein. It’s perfect for people who need to add more protein to their diets but keep calories low.

However, you should make sure to buy low-mercury varieties.