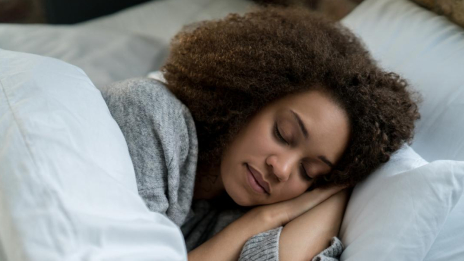 Humans spend roughly one-third of their lives sleeping. Despite this, sleep still remains something of a mystery.

However, we do know that sleep is deeply connected to our well-being, mood, and health.

A night of bad sleep means more than just being grumpy in the morning. In the short term it can mean poor performance at work or school. But chronic sleep deprivation can lead to serious health problems including increasing a person’s risk of heart attack and early mortality.

Sleep scientists say that more needs to be done to educate the public about healthy sleep behaviors and dispel rumors about unhealthy ones.

In a study, researchers put together an exhaustive list of misconceptions of sleep and narrowed them down to 20.

The myths were ranked according to two different characteristics: how false they were and their potential impact on public health.

These are the top eight most harmful sleep myths from that list.

#1: Many adults need only five hours or less of sleep for general health

Researchers rated this myth as having the most potential harm on public health by far.

Habitual sleep deprivation is associated with diverse and far reaching health effects and none of them are good.

Sleep deprivation will affect your heart (increasing risk of hypertension and heart attack) and your mind (decreasing cognitive functioning and increasing risk of depression). Risk of diabetes and obesity also increase.

For adults, the Centers for Disease Control and Prevention (CDC) recommends between 7 and 9 hours of sleep per night, and there really isn’t a shortcut to get around it.

#2: Watching television is a good way to relax before bed

You’re probably already aware that this one is a no-no. And it goes for more than just television. Cellphones, tablets, and all kinds of personal electronics are not a good idea when you’re getting ready for bed.

Researchers have increasingly focused on “blue light” emitted by screens and its effect on sleep and negative sleep-related health outcomes.

#3: In terms of your health, it doesn’t matter what time of day you sleep

Our bodies tend to follow a natural rhythm of wakefulness and sleep that is attuned to sunrise and sunset for a reason.

However, due to our careers, families, and social lives, we don’t always do our sleeping during the night.

While some missed sleep here and there isn’t necessarily a big deal, shifting your sleep schedule long term isn’t healthy.

“Timing of sleep is important,” said the study’s author Rebecca Robbins, PhD, a postdoctoral fellow at NYU School of Medicine in the Center for Healthful Behavior Change, “That’s why we see health risks cluster among individuals who work on shift schedules.”

#4: Lying in bed with eyes closed is almost as good as sleeping

You may feel like you’re getting sufficient rest lying in bed, even if you can’t quite get to sleep, but researchers rated this myth as majorly false as well as potentially harmful.

Everything from your brain to your heart to your lungs function differently when sleeping compared to being awake. If you know you’re awake, the rest of your body does too.

“One is either sleeping or awake with little overlap,” write the authors. “Available evidence is showing that cognitive activity when a person is sleeping is distinctly different from wake with eyes closed.”

#5: Being able to fall asleep anytime and anywhere is a sign of a healthy sleep system

“A healthy sleeper actually takes a couple minutes to fall asleep. We do see that if people fall asleep right away… that can be a sign that they are not getting quite enough sleep,” said Robbins.

Yes, it may seem like a gift, but falling asleep instantly, whether on an airplane or in a boring meeting, could actually mean that you’re sleep deprived.

Feinsilver even calls this myth “dangerous, because it minimizes the idea of excessive daytime sleeping as being bad for you or being a sign of something that’s bad for you.”

#6: Alcohol before bed will improve your sleep

A Pernod digestif after dinner. A nip of brandy before bed. Some of grandpa’s old cough medicine. Whatever your poison, it won’t help you sleep any better. In fact, it will likely make you feel worse the next day.

“Not only is that tremendously wrong, but it’s also pretty dangerous. It’s really terrible for sleep,” said Feinsilver.

He also notes that a nightcap can also cause sleep apnea or make it worse.

#7: Your brain and body can learn to function just as well with less sleep

Between work, friends, and family, who has time for a full night’s sleep?

“It’s just this common belief that if you try a little bit harder, you might be able to survive the consequences of insufficient sleep. You just adapt a little bit more or you have another cup of coffee and you’ll be able to get by and power through. We hear that all the time,” said Robbins.

However, it’s just not true. As much as we’d like to think we can train our bodies to need less sleep, the science says the opposite.

“All of the evidence shows, without a shadow of a doubt, that chronic insufficient sleep, of five six hours or less, is associated with a host of unfavorable consequences,” she said.

#8: Although annoying for bed partners, loud snoring is mostly harmless

Loud snoring is actually one of the most common symptoms of sleep apnea, a disorder in which an individual can actually stop breathing while asleep.

Chronic loud snoring can indicate that the airway is being blocked at night. But not all snoring is a sign of sleep apnea.

Sleep apnea affects quality of sleep. So if you snore loudly and you suffer from fatigue or sleepiness during the day, those symptoms together could mean you have it.

Individuals with other health conditions including being overweight or obese, having high blood pressure, or being a smoker increase the risk of sleep apnea.