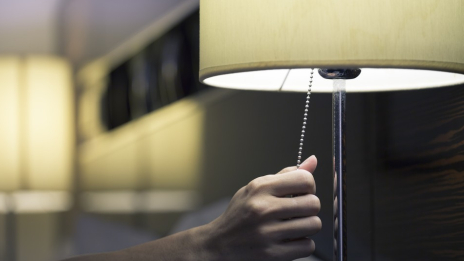 As a child, you might remember hearing “lights out” as a way to tell you it was time to go to bed. Having the lights off at bedtime is much more than a common bedtime phrase, though. In fact, the decision to turn out the lights, or leave them on, could affect your health.

Yet the problem lies beyond ceiling lights and lamps. Light surrounds us from multiple sources, including streetlamps, televisions, and the blue light emitted from our electronic devices, like cellphones, computers, and tablets.

Sleeping with any lights on is considered detrimental to getting a good night’s rest. Subsequently, not getting enough quality of sleep can lead to numerous health consequences. If you’re considering leaving a light on at bedtime, consider the following repercussions.

Side effects of sleeping with lights on

Exposure to light during sleep makes it difficult for your brain to achieve deeper sleep. The more shallow or light sleep you get at night, the more your brain oscillations (activity) that allow you to get to deeper stages of sleep are negatively affected.

Aside from conditions that directly affect your brain, a lack of deep sleep from light exposure has also been linked to the following side effects.

Sleeping with the lights on has been linked to depression. Blue light from electronic devices may have the worst effects on your mood.

A lack of sleep can also cause moodiness and irritability. Children who don’t get enough sleep may be more hyperactive.

One study on women found that obesity was more prevalent in those who slept with a television or light on.

Study participants were also 17 percent more likely to gain around 11 pounds in 1 year. Lights on outside of the room were found not to be as large of factor compared to light sources inside the bedroom.

One factor in lack of sleep-induced obesity could be food intake. Studies have shown that the less sleep you get, the more food you’ll likely eat the next day. This can affect the timing of your meals, too, eating late at night may lead to weight gain.

Not getting enough quality sleep makes you less alert the next day. This can be especially dangerous if you drive a car or other type of machinery. Older adults may also be more prone to falls.

If light continues to interfere with your sleep in the long term, you could be at an increased risk of certain chronic illnesses, whether you have obesity or not. These include high blood pressure (hypertension), heart disease, and type 2 diabetes.

Are there benefits to sleeping with lights on?

Sleeping with the lights on may be beneficial if you’re trying to take a quick nap during the day and don’t want to fall into a deep sleep. However, this technique still doesn’t lend itself to quality of sleep.

Nightlights and other light sources may be helpful for young children who might be afraid of the dark. As children get older, it’s important to start weaning them off of light sources at night so they can achieve better sleep.

Overall, the risks of sleeping with the lights on outweigh any possible benefits.

What if I can only sleep with the light on?

While some children prefer to have a light on for comfort, many adults are guilty of keeping lights on, too. Perhaps you’re used to keeping a bedside lamp or television on at night. Or maybe you look at your phone or tablet.

It’s difficult to go without lights off in your bedroom when you’re used to having them on. You can start by using a small red-emitting nightlight, and then get rid of that once you’re used to the darkness.

It’s been found that red nightlight bulbs don’t have the same detrimental effect on melatonin production as other colored bulbs.

It’s also important to incorporate other healthy sleep habits into your routine so you won’t notice the lack of lights:

Once you wake up in the morning, make sure you seek light, either artificial or natural, as soon as you can. This will eventually set the tone for your body that light equates to wakefulness, while darkness means it’s time to sleep.